North America is home to a large number of diverse indigenous cultures, and within those cultures tend to be multiple independent nations with many smaller cultural differences between them. Understanding the enormous differences that exist between First Nations' cultures is a key starting point to any study or teaching of Canadian First Nations' history, culture, religion, etc.

The diversity of Canada's geography was a large contributor to the historical diversity of the cultures of each area. Different groups based their lives and economies on the most abundant resources available in their region. As such, there are generally understood to be six "culture areas" in Canada. The independent Nations that live in each "culture area" historically tended to share overall cultural similarities, although it should always be remembered that difference existed between nations sharing a similar culture.

If this is confusing consider a European comparison: Spain and France for instance. They are both democratic countries whose main religion is Catholicism. The people tend to eat similar types of food (fruit from orchards, meat from farms, seafood is common on the coasts). The people work the same types of jobs, and have languages which are historically linked. Spain and France are culturally similar, but I think we can all agree that there are still vast differences between the societies of the two. 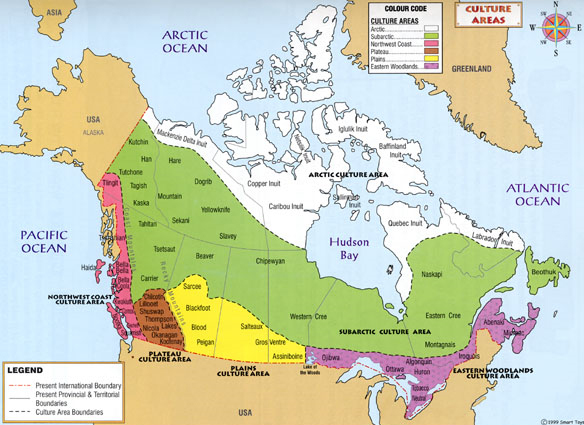 A map detailing the six main cultural areas within Canada.

Please find below a very brief summary of how the geography of Canada so strongly affected the cultures of the Nations from each area.

Arctic:
Mainly occupied by Inuit Nations. Since there is very little vegetation there, historically, the main resources available in this area were almost entirely animal based. Food, shelter, clothing, transportation, heat sources, were all provided by animals. Communities were semi-nomadic, following their food to stay alive, using sealskin tents as shelter during the summer and igloos made of snow when traveling during the winter.

Subarctic:
A vast forested land in Canada, sometimes this region is divided into east and west to distinguish between Algonquian and Athapaskan peoples who were the main occupants of this region. Shelters were generally wigwams made from birch bark and the semi-nomadic communities participated in the hunting and gathering of a wide range of foods and resources depending on the region.

Northwest Coast:
This area encompasses most of the coastal area of British Columbia. It was occupied by a large number of independent, sedentary communities. They relied on seafood for much of their diet, and used the tall, straight wood of the cedar trees to make permanent houses, massive dugout canoes, artistic totem poles, and even used the fibres from the bark to make clothing.

Plains:
Plains nations relied heavily on the wild buffalo that roamed the land for all aspects of their life. Food, clothing, shelter, were all derived from the buffalo, which means that these communities tended to be highly nomadic, a lifestyle which was greatly aided, for a short period, by the introduction of horses. The traditional pole and buffalo skin tipi is a creation of this culture.

Plateau:
This is a small area between the Rocky Mountains and the Coast Mountains which means they live in a diverse geography of valleys, plateaus, and mountain ranges. Therefore, historically, the peoples living in this area had access to a wide range of resources which followed the seasons: fishing, hunting, and gathering a variety of foods. They were also positioned so closely between the peoples of the plains and the west coast that they shared many cultural and economic ties with those two very different cultures.

Eastern Woodlands:
This is a smaller region in Canada but it extends into a much larger area in the United States. This area is shared by two main culture groups, the Algonquians who also inhabited the subarctic region, and the Iroquoians. Because of their highly developed agricultural systems, Iroquoian communities were historically made up of sedentary villages of longhouses whose main diet consisted of squash, beans, and corn. Their traditions, travel, and trade were influenced by the sedentary nature of their society. They were also one of the only matrilineal First Nations cultures in Canada.

Each culture group had, and has, its own separate: religion, history, hunting techniques, clothing and personal adornments, travel methods, shelter types, political makeup, language, sports and leisure activities, etc. The full study of Canada's Indigenous Peoples is the study of a vast multicultural society.

*Available at Heritage College's library: First Peoples in Canada by Alan McMillan and Eldon Yellowhorn. This book is an excellent beginner's guide to the history of first peoples' cultures all across Canada. Each chapter focuses on a particular culture area and looks at the history and culture of that area chronologically.